We were going to stay with Momma’s long-time friends, Ruth and Wally Bennett, outside Delray. Mrs. Ruth always dressed up as a witch at Halloween, which was the next day. She gave out Halloween gifts instead of candy. Clara went to the Bennett’s with us. She liked the cook at the Bennett house. Her name was Dora. They had always had a good time talking in the kitchen. “Can you tell me a story about Momma?” I asked her.

“The day she was born, your grandfather took your Uncle Herbert, who was six years old, to see the baby in the hospital. I can see him right now. He had on a blue coat with a blue hood all trimmed in red. He stuffed his pockets full of toys to take to his new baby sister. A brand-new baby couldn’t play with toys but he didn’t know that.”

“A policeman is pulling us over,” Momma said.

Momma pulled over to the side of the road. The policeman got out of his car and came to Momma’s window.

“What is she drinking?” he said.

“Let me see the bottle,” the policeman said.

I guess Momma handed him the bottle.

“I will just pour the Coke off and give you back the bottle,” he said. I heard the Coke pour onto the pavement. “Here’s the bottle, lady,” he said, presumably to Momma. “You can have it.”

“I guess because white policemen wonder what black people are drinking out of bottles,” Momma said. “It’s really because we live in the South.”

The next day Momma took me to see the false-eye maker. My hands were shaking. I held onto Momma’s left arm with my right hand as tight as I could. We walked into Mr. Brown’s office. “What was the cause?” he asked.

I already did not like Mr. Brown. He had not even said hello to me. Grandmomma said you should always say hello to people, and say “nice to meet you” or “nice to see you.”

“What color were her eyes?” Mr. Brown asked. He had one of those high men’s voices that bothered me.

“Blue,” Momma said and she didn’t sound happy. I was sitting in a leather chair with a hard back. The chair felt way too big for me. “Put your head back,” Mr. Brown said. “I’m going to put a glass conformer in.”

He pushed and pulled upon my right eyelid until he got the glass conformer securely in place. He said he was surprised that the first conformer he tried fitted so well over my remaining eyeball. Mr. Brown said he would paint a glass eye just like the conformer to match my other eye so I could wear it as a prosthesis or false eye.

And then began the long journey in which we tried to find someone who could make a prosthesis that matched my left eye in every way. A never-ending issue was that the right prosthetic eye always opened much wider than the left eye, in spite of tremendous advancements in the making of these prosthetics. For some years they had been carefully molded from acrylic. After fifty years I gave up and bought myself a pair of $100 sunglasses.

Recently, my daughter was looking at some of my pictures from when I was a two-year-old. “You had beautiful eyes before you were blinded,” she said.

Where the girls are so pretty

I first laid my eyes

As she wheeled her wheel barrow

In streets broad and narrow…

“Hi, Peggy,” she said. “It just opens so much wider than the other one.”

My heart sank. I knew it felt that way but I had hoped it didn’t look that way.

“Y’all want to play ‘who’s the prettiest’?” said Carol, another girl in our class.

Jackie and I joined hands with Carol in the middle.

“Who’s the prettiest?” we shouted. I joined in as Carol said “Jackie is” without hesitation.

I think if I could have had either the disability or the disfigurement it might have been okay. The combination seemed overwhelming. On the other hand, I learned faster and remembered more than most of my classmates. Other kids said I was smart. Teachers said I was smart. Well, I was going to be smart. I was going to raise my hand faster and make straight A’s on tests. I became an overachiever by the second grade. Billy was smarter but he didn’t feel that he had to make the kind of grades I did. 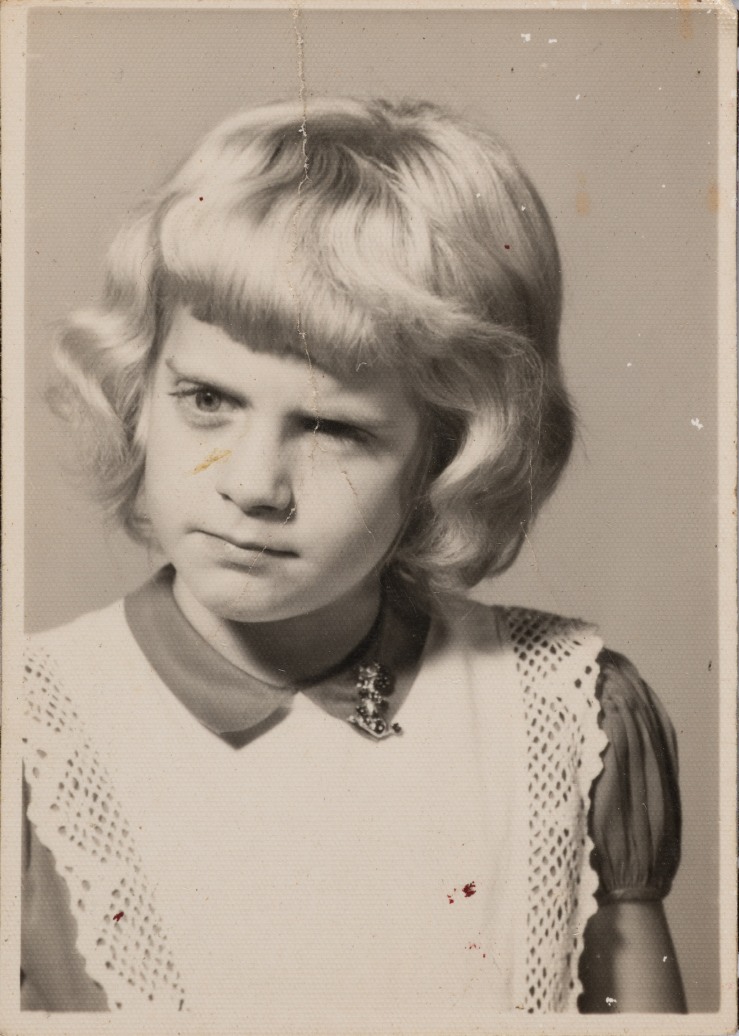